London’s Mayor Boris Johnson has just awarded an enthusiastic thumbs-up to the amended plans for the addition of a cycle path to run from east to west through central London. Officially London’s longest ever cycle path, it will stretch along the Victoria Embankment roadway reaching from Tower Hill to Paddington.

Controversial for a number of reasons, not least due to the additional 16 minutes the original proposal was estimated to add to motorists’ commute from Limehouse Link to Hyde Park Corner; a distance of 12.3km. Initially the idea was to remove a single lane from the westbound lane, however, as that brought about somewhat of an upheaval from associations such as City of London, London Travelwatch and the London Taxi Drivers Association, plans have since been improved upon.

Boris Johnson thanked Transport for London (TFL) engineers and traffic managers for their input into the amendments which see a decreased predicted delay from 16 minutes to just 6. A single, thinner bike lane will follow the A3211 Victoria Embankment separated by an elevated curb side.

Awaiting final TFL approval, expected to come on February 4th, construction could be underway as early as April this year. A quick job, works are anticipated to be completed by the Northern Hemisphere’s spring of 2016.

The proposal comes as a follow-up to the local governments’ continued and increased support for cycling as a viable mode of transportation through the City of London. Commissioner of Transport for London, Peter Hendy, hopes to see the proposal transform the city, providing safe and attractive cycle paths for the whopping 170,000 bike journeys made through and across London on a daily basis.

Among other organisations, the project is backed by UK’s National Health Service (NHS) following a number of cyclists’ deaths on city roads.

Given the meteoric amount of government enthusiasm, it comes as no surprise that this singular proposal is just a small part of a greater plan to continuously upgrade cycling opportunities and outlets throughout the major city. Fittingly, TFL is dictating the number of bicycle parking spaces required for each new development proposal. Such is evident in the Foster + Partners ‘250 City Rd’ development which currently stands to offer one bicycle parking station per each bedroom in the building. 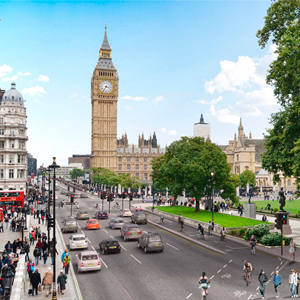 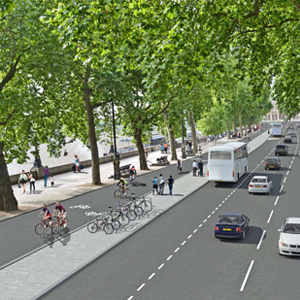 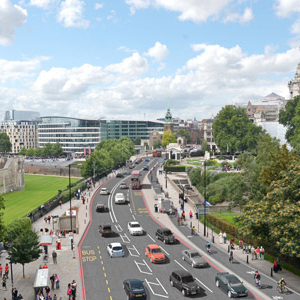