Architecture firm Snøhetta has designed a pair of ring-shaped platforms linked by a cable car, which will offer expansive views of the Alps to residents and visitors in Bolzano, Italy.

Bolzano, which has approximately 100,000 residents and has been ranked as one of the best Italian cities for quality of life, is the provincial capital of the South Tyrol region in the north of the country.

The new cable car design scales the Virgolo cliff in the foothills of the Alps, reestablishing a link that was broken when the town’s previous cable car line closed in 1976. The project is expected to be a major draw to bring tourists to the small city.

Snøhetta bested Zaha Hadid Architects and Coop Himmelb(l)au in an invited competition conducted by SIGNA Group, an Austria real estate interest that is developing the project in partnership with the town.

The base ring, which cantilevers over a hill, will be entered via a large escalator. Visitors will be able to look back down over Bolzano as they ascend. From there they will board one of 16 cars, the cabins of which will each hold eight passengers, and be transported up the mountain in just over a minute.

“The base station is only four minutes from the city centre, so you can go from the centre of town to the top of a mountain in about five minutes – a really quick trip,” Patrick Lüth, a partner at Snøhetta. “We don’t want people to linger at the base. It’s really just for take-off.”

The upper ring will include a 120-seat restaurant, a bar, and an exhibition and event space all topped by a ‘mountain plaza,’ a large open-air viewing platform that could also host concerts or markets. “The scale feels right for the city,” Lüth said. The upper platform is about 180 m (about 590 feet) above the centre of town.

Both rings will be clad in local marble, which will help tie the futuristic-looking forms to their site. The ring-shaped forms underscore the panoramic, 360 degree views.

The cable car will use existing Italian technology, though the Snøhetta team is hoping to customise the cars, possibly by working with local artists. “We would love to have a look at those cabins. It would be great to create something unique to the place,” said Lüth. 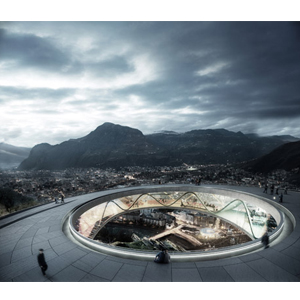 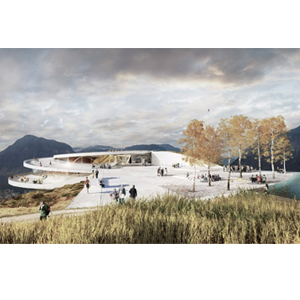